Michael Rooker is a favorite of Guardians of the Galaxy director James Gunn, having worked with him in Slither, Super, and now the Marvel blockbuster.

Gunn will post something new from BTS everyday for the next month until the release of Guardians of the Galaxy. Today, Gunn posted a photo of his friend Rooker, who plays Yondu, to the Gunn’s Twitter and Facebook profile. Gunn also explained why his Yondu won’t have his trademarked red mohawk:

“Rooker is my friend, but he is clumsy and I don’t want him knocking his head off walking through doorways. I’m in a surreal situation where the biggest disappointment expressed by some fans over the comics-to-movie translation is that Michael Rooker doesn’t have a flamboyant and flowing three foot red fin atop his head.”

“‪#‎gotgpicoftheday‬ Michael Rooker onset as Yondu. You’ll be seeing more of him soon. Yondu was not in the original script. I added him and wrote the role specifically for Rooker. I wasn’t sure Marvel was going to go for either idea, so I was relieved when they responded enthusiastically to both.”

Gunn later admits that Yondu “…does have a fin and it is very awesome it’s just very short. I could have done a lot of things but I helped to design the way he looks because I like it better and believe it.” 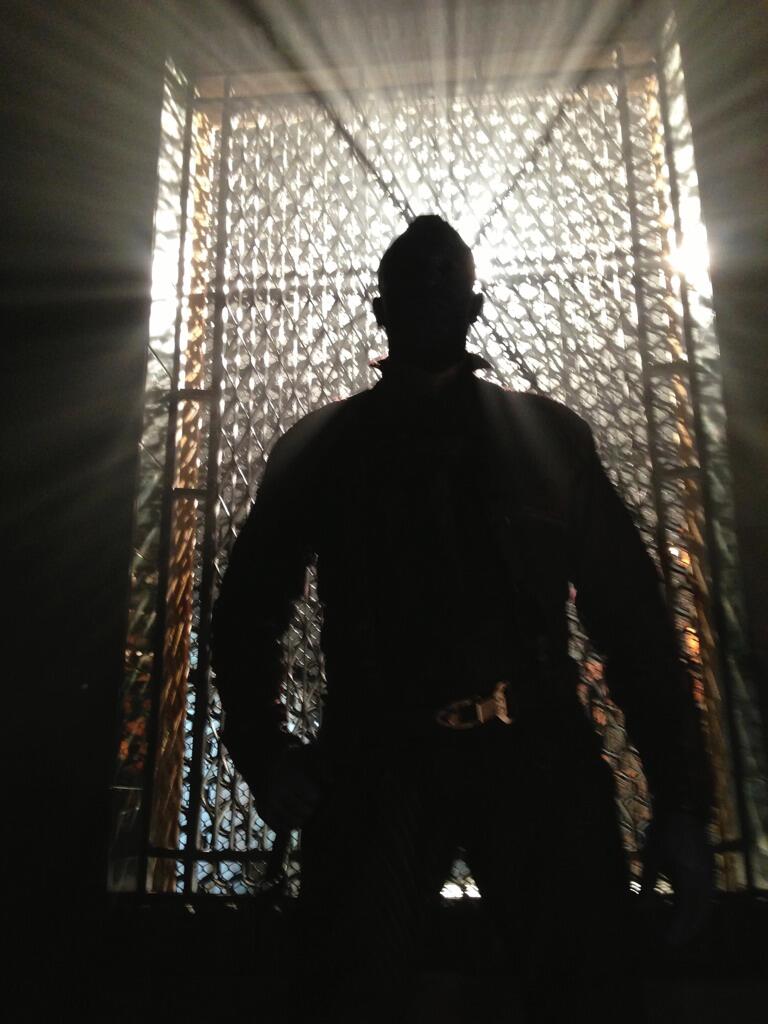 Here are a few other #gotgpicoftheday from the last week.

Rehearsal room. I hadn’t rehearsed much with other films, but with Guardians I was lucky to have a week or so before shooting with Chris Pratt, Zoe Saldana, Sean Gunn, Dave Bautista (Batista) and Michael Rooker. We were able to work out links within the scenes themselves (I did some rewriting around this time) and within the performances. The colorful lines on the ground were all various spaces in the movie – parts of the Kyln, the Milano, etc – so we knew exactly what we were working with. What stunned us most in the room was Zoe’s ability to say a completely awkward expositional line as if it was the most natural thing in the world. And everyone else sucked at it!

Me trying on an early prototype of the Star-Lord lenses. The visibility wasn’t that bad (well not until @prattprattpratt had to wear them while running through pouring rain on the first day of shooting). Our head of visual development Charlie Wen designed dozens of eye shapes. But, unlike most superheroes these days, who go to the extremes trying to be ‘cool’ or tough, I wanted Quill’s look to convey wonder, awe, and innocence. He is in a perpetual state of surprise. I actually kept have the props guys making the eyes bigger and bigger until Quill looked like an oversized fly. Then even I realized I had gone too far. ________________________

I’ll be posting a #GotG behind-the-scenes pic-of-the-day every day here on Instagram until #guardiansofthegalaxy is released on August 1 (and beyond).

Starting today I’ll post a ‪#‎gotgpicoftheday‬ every day up through the release of Guardians of the Galaxy, all taken from my personal behind the scene photos. We’ll start with @DaveBautista returning from a bathroom break to find ‪#‎VonSpears‬ had appropriated his seat. Face off.