No offense to Chris Hemsworth, but this Thor would have been a fascinating character.  Tom Hiddleston auditioned for the role of Thor before they cast Hemsworth and they like Tom so much that they called him in for Loki. The rest is history.

I’m sure that Hemsworth had a bit more of that masculinity necessary for the role, but the tumblrs of love for Hiddleston suggest that ladies love Tom!

Goodness, I want to see this version of Thor right now!

@AgentsofSHIELD has a good night after weeks of losing its audience. This episode included a direct Thor/Avengers tie-ins, better character development, less Skye, less whining, and ONE BIG SURPRISE!

@TVbytheNumbers has a break down of the particulars:

In viewers and young adults, the Net earned its strongest performance on the night in 8 weeks – since season premiere Tuesday on 9/24/13. 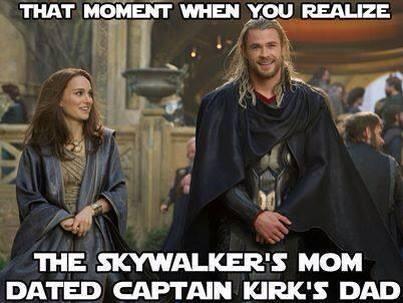 via Thor: The Dark World Easter Eggs, Trivia & References.
The entire contents of the various racks and tanks belonging to The Collector (Benicio Del Toro) will take some serious time (and likely a home video release) to fully examine, since most objects are only seen for split seconds – with some early rumored collectibles debunked by other viewers.What does stand out among the various objects is the rather sizable tank containing what looks to be a large object of both organic and mechanical design. It’s been suggested that the item is in fact Adam Warlock’s famous cocoon, from which the troubled man was reborn with a new purpose, and an irrevocable link to the Soul Gem – set to play a major part in Marvel’s Cinematic Universe.So far, it’s hard to confirm whether the cocoon is in fact Warlock’s, since it isn’t visible in its entirety. But given Joss Whedon’s affection for the character, we wouldn’t be surprised to see Warlock emerge in the near future.

SPOILERS: For those who haven’t seen it, Thor the Dark World makes beautiful use of a favorite character from both Thor 1 and The Avengers. Dr. Erik Selvig is Jane Foster’s mentor in the first movie and shepherds some of her fantastical scientific theories through the first film. He also plays an interesting role by giving Nordic detail to the introduction of the characters into the Marvel Cinematic Universe. He notes specifically that these figures (Thor, Loki, and Odin) were the characters of myth and legend in his childhood.

He ultimately also plays the crucial role of knowing about S.H.I.E.L.D. and "a genius in gamma radiation". Thus he became our link to the Avengers Initiative. Selvig then becomes Loki’s vessel into Pegasus labs where he enters Midgard to destroy and conquer. Selvig ultimately builds the machine to power to the Tesseract to open the wormhole for the Chitauri and then wakes up enough to offer Black Widow an option for disarming the machine to close the wormhole.

Selvig’s crucial role in the MCU did not stop there. In the beginning of Dark World: Selvig has lost his "marbles" apparently as he rants and raves around Stonehenge trying to prevent a cataclysmic event from happening. Jane Foster is on to some of the same evidence, but can’t really make heads or tails of it until she runs into Selvig later in the picture. Before she sees Selvig again, a viewer must assume that she is simply tracking energy displacement to try to find a way back to Thor (whom she hasn’t seen in almost 2 years). Selvig remains hospitalized and your realize that he has become a shell of a man. In the movie, he is placed as a comedic device. We know this because almost every scene he is in is laugh-out-loud funny without the direct use of dialogue. Unlike Darcy (Kat Dennings), Selvig situational comedy is much more funny than lines from "Two Broke Girls".

I believe that Selvig’s importance is not lost in the segment of the MCU because he speaks to a great threat to humanity that continues to creep from the edges: S.H.I.E.L.D. Selvig is arrested for running around Stonehenge naked with his equipment in an obviously agitated state. This lands him into a mental facility, but not before the story is broadcast on the news in London because he is still infamous his involvement in the Battle of New York. We later learn, after Darcy and Jane save him from the asylum, that he hadn’t been the same since Loki was poking around in his head. **One has to wonder who else might have been affected by Loki’s influence? Hawkeye?**

Selvig says that his main problem has been having a God living in his head, but we know that he is also taking copious amounts of medication. My thought is that S.H.I.E.L.D. has also been trying to cover up certain elements of the Battle of New York (like the prelude, the event itself, and the aftermath). They have also been attempting to stifle some of their loudest opponents and witnesses to the events. If you watch Marvel’s Agents of S.H.I.E.L.D. then you know how much the organization, in the MCU is obsessed with secrecy (Level 7) and takes a proactive approach to anomalies around the globe. Selvig had intimate knowledge of their innerworkings as we know from the beginning of the Avengers and shared intimate details of Asgardians, Chitauris, and other otherworldly events associated with New York. Heck, he knows where Thor lives in Midgard.

Larger point here is that S.H.I.E.L.D.’s image has continued to mutate to an omniscient hegemony bent on preventing anything out of the ordinary from happening. Jane Foster even yells at Darcy, after disappearing for 5 hours, that S.H.I.E.L.D. would be there to shut them down after the discovery of the wormholes discovered at the abandoned warehouse. Coulson and Fury tout the necessity of the agency for protecting the Earth, but we know things are changing and the "Winter Soldier" leads me to believe this even more strongly. Again, Selvig’s tech comes to be the salvation of the Earth by replicating the wormholes that was being created by the convergence of the 9 realms. He seems to have reclaimed his senses by the end of the movie. However, I think Selvig has become a victim to S.H.I.E.L.D.’s best intentions, but will remain crucial to the ongoing MCU now that he has recovered some of his confidence if not most of his senses.

PS: I will later discuss my thoughts on what S.H.I.E.L.D. will have to do with the creation of Ultron.

These elves ain’t so nice.

Interesting that they are going back in for reshoots, but this already looks like a rich and exciting film. We’ll see…