THOR 3 Gets A Writing Pair In Craig Kyle And Chris Yost.

As @DC struggles to finally come up with a plan to satisfy its hungry fanbase, @Marvel just keeps moving forward with its phase 3 plans for the MCU. They have now announced the 2 writers for the next Thor movie, a day after stories spread about their strong interest in having the Russo brothers back for the 3rd Captain America film.

Comicbookmovie.com posted a picture that appears to be a mock up of a possible title for the next Thor. Could be interesting as we get a further detailed look into the 9 realms.

Frequent Marvel Comics writers Craig Kyle and Christopher Yost, who served as an executive producer and a co-writer on last year’s Thor: The Dark World, respectively, will pen the screenplay for Chris Hemworth’s third solo outing as the God of Thunder. “I am proud of Craig and have enjoyed working with him over these past years,” stated Kevin Feige. “His creative instincts have helped shape Thor and Thor: The Dark World at every level of the filmmaking process. The entire team at Marvel is very happy to continue collaborating with Craig as he continues as a screenwriter working with Christopher on the forthcoming chapter of Thor’s adventure.” Read more at http://www.comicbookmovie.com/fansites/MarvelFreshman/news/?a=93650#TgP6mupYW8AjEbJ1.99

No offense to Chris Hemsworth, but this Thor would have been a fascinating character.  Tom Hiddleston auditioned for the role of Thor before they cast Hemsworth and they like Tom so much that they called him in for Loki. The rest is history.

I’m sure that Hemsworth had a bit more of that masculinity necessary for the role, but the tumblrs of love for Hiddleston suggest that ladies love Tom!

Goodness, I want to see this version of Thor right now!

What if we could bring together a group of extraordinary characters and show all their faults?

A slightly newer look at Thor’s next installment brings not much new in fact. One feature missing is the scene that had everyone at Comic Con buzzing about a certain hero’s hand and his loss of that hand.

#ThortheDarkWorld gets some epic poster Love by @Marvel. Very similar to Iron Man 3 poster as the protagonist seems a bit stressed as a hell breaks lose behind him.

#ThortheDarkWorld gets some epic poster Love by @Marvel. Very similar to Iron Man 3 poster as the protagonist seems a bit stressed as a hell breaks lose behind him. 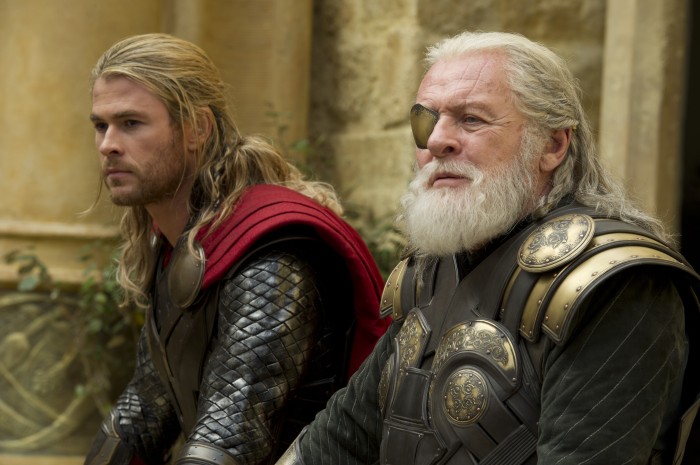 The new Thor is wrapping up production to be in the can for later in 2013. I think this movie may be a little gem in the Marvel canon down the line with influences of the Avengers, Joss Whedon, Alan Taylor, and Game of Thrones playing a role in grounding such an out-of-this-world character.

Count me excited on this one. This sourced story also features discussion with Chris Hemsworth on his new characteristics in this Dark World. I can’t wait for Loki to wreck havoc.

Cool, but tiny little Thor pics! I wonder when someone will come up with .GIF wallpaper or wrapping paper. How about GIF clothing!!! Enjoy!